Our group has been interested in both inorganic scaling and organic fouling. We have modeling scale precipitation from high salinity water, including brines and produced water, by building on the Pitzer-Kim formulation. We have experimentally studied inorganic fouling in membrane distillation, and introduced means of inhibiting MD fouling.

We have also experimentally studied organic fouling using alginate. We have shown experimentally that high hydraulic pressure is not by itself a factor in alginate fouling, cleaning, or flux recovery. In additional, we have also developed chemical-free technologies for removing organic foulants from RO membranes.

Selected Papers on Fouling and Scaling in Desalination Systems 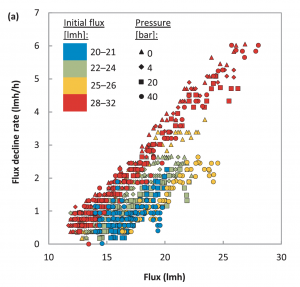 Flux decline rate (averaged over 2 h) plotted against flux. Flux decline rate at a given flux generally increases with increasing initial flux for this low-salinity feed. The hydraulic pressure does not affect flux decline. (Tow & Lienhard, 2017)