Our group has measured, correlated, or modeled the thermophysical properties of seawater, ground water, and a range of produced waters. Our work has resulted in an open-source code for calculating seawater properties (available at: http://web.mit.edu/seawater). We have made high-precision measurements of seawater surface tension over a broad range of temperature and salinity. We have compiled solubility data suitable for analyzing arbitrary produced waters. We have also collaborated with the US Geological Survey to analyze the composition of tens of thousands of ground water samples, and we have quantitatively evaluated the limitations of simplified activity coefficient models for important electrolytes.

Our seawater surface tension correlation has been adopted by the International Association for the Properties of Water and Steam (IAPWS) as an international standard guideline.

G.P. Thiel and J.H. Lienhard V, “Treating produced water from hydraulic fracturing: composition effects on scale formation and desalination system selection,” Desalination, 346:54-69, May 2014. (doi link) (preprint) Extensive use of the Pitzer-Kim model and tabulations of the standard-state Gibbs free energy of formation, the enthalpy of formation, and the molar specific heat capacity for aqueous and solid compounds.

K.H. Mistry and J.H. Lienhard V, “Effect of Nonideal Solution Behavior on Desalination of a Sodium Chloride (NaCl) Solution and Comparison to Seawater,” J. Energy Res. Tech., 135(4):042003, Dec. 2013. (doi link) Includes a correlation for the osmotic coefficient of NaCl(aq) for molality from zero to saturation. 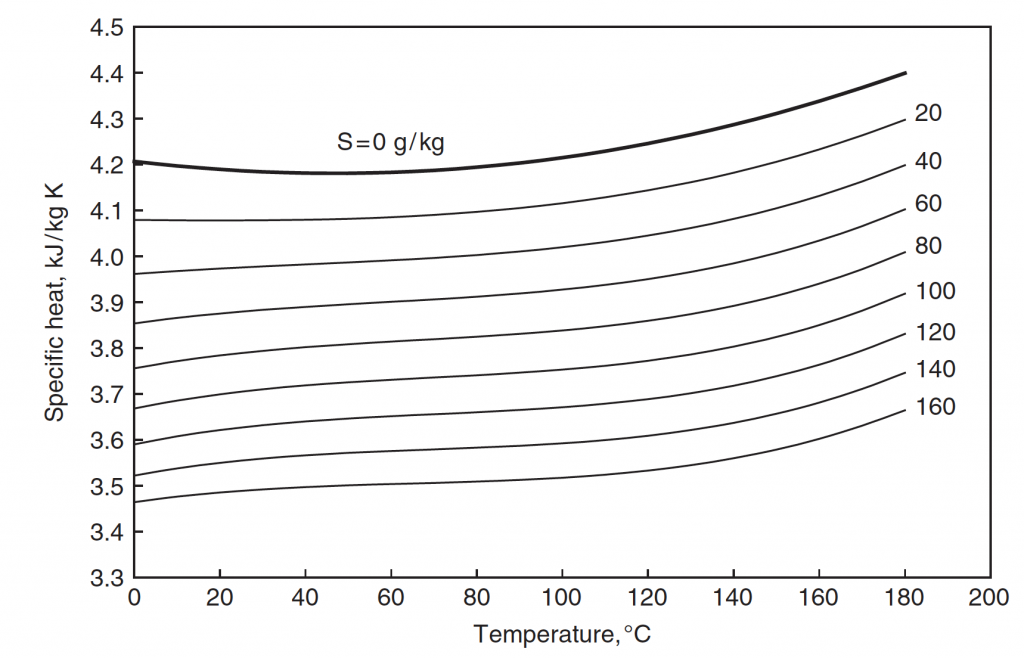 Isobaric specific heat capacity of seawater as a function of temperature and salinity (from Sharqawy et al., 2010)